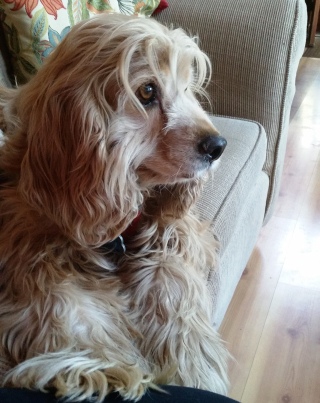 We have known Copper for several years. He has always had a problem meeting new people and being in new situations. He had separation anxiety and he had bitten several people. His mother was out of her depth with him and finally gave in to her family pressuring her to either have him killed or give him up. We decided to take him on as one of our aggressive dog projects.

Most people are afraid of aggressive dogs because they don’t know how to deal with them. It is surprisingly easy and they can be a rewarding project if you know what you are doing.
The first week Copper was so traumatized by losing his mom he had a really rough week. Our house has four adults and three other dogs and all though full it is still calm and mellow most of the time. We just ignored him and slowly Copper got more and more comfortable. I knew we had turned an important corner seven days later when he met me with the other dogs at the door and his tail and whole butt were wagging he was so happy to see me. Our relationship started at that point, when he was ready and not one second sooner. Copper quickly advanced to letting me pet him, jumping on the couch for snuggles and eagerly taking treats from everyone. We had guests over who ignored him until he was ready to eat a treat from their hand. He was perfect every time.
A week or two later he was ready to go out in public for some meet and greets. I would take 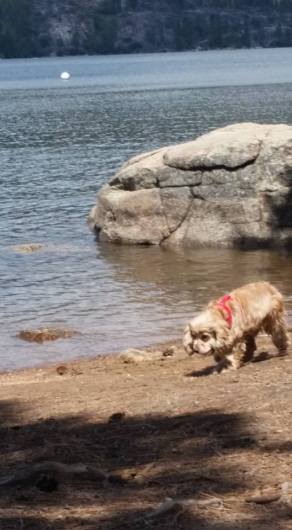 him with me places and ask people to feed him a treat but not pet him. The goal is to make people fun and, like many dogs, he hates having his head petted. By this time he was just another dog in the house. No drama, no problems, new people ignored him at first and the treats came out when he was ready. He was so good he got to come up to our cabin for two weeks with the rest of the dogs. I am working on getting him used to having his head petted and collar pulled until he is ready for a stranger to try it..
Next he will attend a basic obedience training class to get used to having dogs and new people interact with him. Pretty soon he will be ready to be adopted. We will look for an experienced dog owner who can continue our work and before too long the world will see the perfectly behaved dog we see everyday at home. I can’t wait!
—Elizabeth
If you would like to learn about how to train aggressive, under socialized Cockers to become model citizens give us a call. We need more fosters who can do this kind of training. It takes an experienced dog person, a huge commitment and a lot of training.
Thank you for your donations, large and small, which allow us to save more dogs like Copper.