I can’t imagine being without my Baby!

Of all the photos of adult female Cockers on the websites, the one of Maizie was the least appealing, and she was the last dog I was interested in.  The picture was taken at the shelter, and she was a sad, matted mess.  By the time I met her, she’d been clipped and bathed, and her perky, curious personality had begun to emerge.  After we walked her around the shopping center where the adoption event was being held, and had lunch, we decided she was “a keeper”.  She had to have some growths (or cysts) removed from her chest before I could bring her home, and Second Chance Cocker Rescue really didn’t want me to take her until the vet had determined that the growths were benign.  But, by that time, I was anxious to have her.  We would face the biopsy results together.  Fortunately, they were all benign.  She’s had several removed since with no problems. 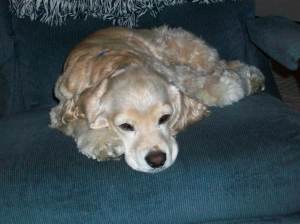 We soon changed her name to Baby – partly because that’s what everyone calls her, even without knowing her name.  Looking at that first, sad photo, you’d never believe it, but we’re stopped on our walks all the time with people saying, “What a beautiful dog!”  And she is!  She may also be the most pampered dog on earth.  She certainly is the sweetest and most lovable.  She and I have recently started volunteer visiting hospice patients and patients in a near-by convalescent hospital.  She is gentle and loving, and all the patients adore her.  (She doesn’t mind the extra attention!)  She loves cats and enjoys visiting the next-door neighbor cats, as well as being with the cat at the dog sitter’s, on the rare occasions I have to leave her.  Having been abandoned, she has real separation anxiety, so she goes pretty much everywhere with me.  She’s so sweet and well-behaved that she’s welcome everywhere.  And she loves children, making a bee-line whenever she sees one.  She is then so gentle that even timid children end up petting and loving her.  She tolerates all sorts of mauling from them – eye-squeezing, ear-pulling, full-mouth-on-the-nose kisses.

That’s my pillow she’s on, in the picture (at the top).  But she’ll move over enough for me to get in when I’m ready!  The other picture is with my great-granddaughter.  She is now the center of my life, and I can’t imagine being without my Baby. Know that I’ll always be more grateful to Second Chance for her than I can express.

One Comment on “I can’t imagine being without my Baby!”