The Holiday Cards Are Here!

Posted on November 21, 2012 by Elizabeth Mazzetti

We are proud to offer some beautiful Holiday cards from some amazing photographers this season. Their subjects are, you guessed it, rescue dogs! Alicia Flores,  Peggy Mundell and Felicia Saunders have graciously donated their work for us to sell as Holiday cards this year as a holiday fundraiser.
All the proceeds go straight to the dogs!

To purchase click on the link and don’t forget to tell us which cards to send Bennett, Dresden, Duffy, Connor or a mix. 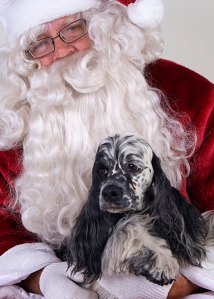 Bennett’s Story: Hi Everyone!  I was just a little bitty pup of 5 weeks when I made the long trip with lots of other youngsters from Arkansas to California.  The human with us thought he’d make bunches of money out here by selling us, but he didn’t know that was the year that it became illegal to sell pups under 8 weeks of age.  Some of my travel-mates were real sick so Animal Control gathered us all up and took us some place safe.  That’s when they called Rescue  and I became a Rescue Puppy!  My new mom was a Rescue Volunteer and she fell head over heels in love with my little freckled face right away and knew that I was meant to be with her forever.  My mommy is a pet photographer, so I’ve learned how to pose lots.  This picture with Santa is one of my favorite memories and I hope it brings peace, love and joy to whoever you send your card to.  Photo by Peggy Mundell, dogbreedz.net.

Inside the card reads: “Santa Knows Who Has Been Naughty and Nice!”  Bennett’s story is  on the back 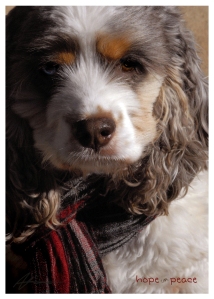 Dresden was adopted by Alicia two years ago. After fostering several dogs for Second Chance, Dresden showed up and they fell in love. Dresden happily shares her with three cats and a lizard. He has helped Alicia raise many a litter of foster kittens. In addition to being a perfect subject for her photography, Dresden is currently in training to be her service dog.  Photo by Alicia Flores, peeshposh@gmail.com

Inside the card reads: “Happy Holidays and a Wonderful New Year!”  Dresden’s story is  on the back.

Duffy was rescued seven years ago as a scared, shy overly sensitive baby boy.  His stay at the local shelter traumatized him making it hard for Duffy to settle in and trust any of his foster homes or trial adopters.  After being returned by three foster homes and two potential adopters Duffy managed to talk Elizabeth into keeping him. They have both been very happy with the arrangement ever since. Photo by Alicia Flores, peeshposh@gmail.com

Inside the card reads: “Seasons Greetings and Pass The Treats!“, Duffy’s story is on the back.

Connor was a youngster when he found himself sitting in a cage at his local shelter after his family decided he was too much for them to handle.  He was pretty nervous about all the commotion but what was worse was the way all the dogs around him were disappearing and not coming back. Luckily he was spotted by a rescue and grabbed up before his time was up. When he first met the Martins he wasn’t really what they were looking for but Barbara could not get him out of her mind. A few days later she called and told us she could not live without him. He was delighted! He is now living the good life with the Martins going for longs walks on the beach every day. Photo by Felicia Saunders, bubnbrat@cox.net

Inside the card reads: “And may your next year be filled with loads of treats and long walks on the beach!“,  Connor’s story is on the back.

To purchase click on the link and don’t forget to tell us which cards to send Bennett, Dresden, Duffy, Connor or a mix.